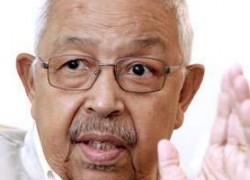 “Throughout his long career, President Pires has been dedicated to the service of his people, including those in the diaspora, while retaining his humility and personal dignity,” the award committee said in a statement.

Pedro Pires, who played a prominent role in Cape Verde struggle for independence from Portugal, was praised for having moved the country from autocracy to a model of democracy and stability.

“The prize committee has been greatly impressed by President Pedro Pires’s vision in transforming Cape Verde into a model of democracy, stability and increased prosperity,” said Salim Ahmed Salim, the chair of the prize committee.

Pires, 77, served as the islands’ first prime minister for 16 years following independence from Portugal in 1975. Pires was appointed independent Cape Verde’s first prime minister in 1975. He remained in the post for 16 years, then lost his country’s first democratic elections in 1991. Pires was then elected President in 2001 and again five years later. He decided not to run for office after his second term expired early this year.

Mo Ibrahim, the founder of the Mo Ibrahim Foundation, praised President Pires for “It is wonderful to see an African leader who has served his country from the time of colonial rule through to multiparty democracy, all the time retaining the interests of his people as his guiding principle, ” and he added, “The fact that Cape Verde with few natural resources can become a middle-income country is an example not just to the continent but to the world. President Pires embodies the type of leadership the prize is designed to recognize.”

In comments to LUSA news in Cidade da Praia, Pires dedicated the prize to all Cape Verde’s independence freedom fighters.

He said he did not yet know how he would use the prize money, adding that his personal financial difficulties were “well known.”

“It’s recognition of 50 years dedicated entirely and exclusively to politics and to the cause of independence and democracy,” he said.

The Ibrahim Prize, established in 2007 by Sudanese businessman Mo Ibrahim, aims to promote and recognize the contributions to democracy and good governance by former African leaders. The prize, which can only be awarded to an African head of state, had not been awarded for the past two years.