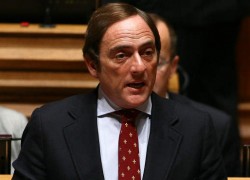 Portas made the announcement while debating the government budget for 2012. He said the decision will save 12.7 million-euro in 2012. He also said that new embassies will open in the Middle East, Asia and South America.

According to Portas, his office will also eliminate 21 % of the current positions in an emergency move to cut costs at a time of austerity. In addition, the 2012 draft budget for the Ministry of Foreign Affairs will be cutting funding by 10.6%, including aid to language institutes abroad.

Currently, half of the expenses at Ministry of Foreing Affairs (166.9 million-euro)are intended to cover costs with staff, including staff at the Portuguese langauge programs abroad managed by Instituto Camões.

Created in 1992, Instituto Camões (Camões Institute ) is a Lisbon-based Portuguese grant making institution dedicated to promoting the Portuguese language and culture worldwide. Sponsored by the Portuguese Government, under the Ministry of Foreign Affairs, the institute runs multiple centers in 24 countries, including the United States.