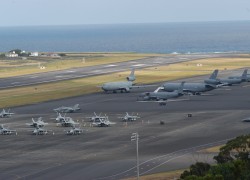 Portuguese Foreign Minister Paulo Portas said Friday the United States air force base on Lajes, in the Azores, is essential for relations between the two countries at a time Washington is assessing the base’s future.

Portas said, “I want to emphasize that the Azores are a key factor in the strategic definition of Portugal, representing added value to the maritime dimension of Portugal in the relationship between Portugal and the United States and for the relevance of Portugal in Europe.”

Following an official meeting with Carlos César the President of the Government of the Azores, Portas was reacting to a statement released in Lisbon, mid-November, by US Secretary of the Navy, Ray Mabus, mentioning that the future of the base was “uncertain” and that the possibility of the US abandoning the Lajes air base was on the table.

Adding to Portas’ statement, President Carlos César said relations between the two countries would be at risk if the United States withdrew from the Lajes air field.

In November Secretary Mabus had said that although no final decision had been taken, the US military could abandon the base in the future after “assessing strategic and budget constraints.”

In a different development, the US Department of State had indicated recently that it is currently reviewing its diplomatic missions worldwide and that the American Consulate in Ponta Delgada, Azores, was under review.

Activated in 1943, Lajes Air Base, located on the northeast tip of Terceira Island, is home to the 65th Air Base Wing and U.S. Forces Azores. It provides logistics support for more than 3,000 aircraft, including fighters from the United States and 20 allied nations.