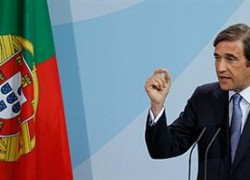 Portugal’s Prime Minister, Pedro Passos Coelho, met Friday with representatives from the Portuguese American community of Newark, NJ, at the Portuguese Sport Club, on his first official visit to the United States.

Addressing a crowd of over 200, Passos Coelho asked them to believe in Portugal and to invest in their country of origin.

Affirming his belief that Portugal will overcome the present difficulties, Passos Coelho said that the immigrant community is at the forefront of those who can help rebuilt Portugal’s ailing economy.

“All of you here are at the forefront of those who can help us overcome these difficulties,” said the Portuguese Prime Minister.

Referring to the Portuguese diaspora, Passos Coelho added, “This requires us to better communicate with our emigrant communities around the world and better connect with those who speak our language, namely the CPLP countries [the Community of Portuguese Speaking Countries] who are some of them amongst the world’s fastest growing economies.”

Acknowledging that mistakes were made in the past, Passos Coelho remarked, “We know what went wrong and we are ready to make corrections,” and that, “These will require sacrifices on our way to economic growth, development and job creation.”

“I urge you to help us in this process. Portugal will not go down. We are a country with an ancient history,” said Passos Coelho. “We really need your support and your contribution in this difficult period we are going through,” he said.

Present were Ambassador of Portugal in Washington, Nuno Brito; the Consul General of Portugal in Newark, Amelia Paiva; the Minister of Foreign Affairs, Paulo Portas; and Secretary of State for the Portuguese Communities, José Cesário.

Pedro Passos Coelho, 46, the leader of the Social Democrat Party (PSD) was sworn Prime Minister of Portugal in June 2011.