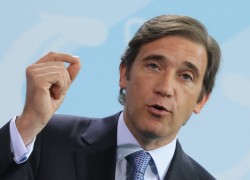 Seguro charged the center-right government of having reneged on the electoral promises made in June by demanding “sacrifices” far beyond those agreed by the previous Socialist Party executive.

According to the announcement, vacation and Christmas bonuses will be axed for all public sector employees and pensioners earning more than Euro1,000 monthly for the life of the bailout, which runs through 2013; Those making less Euro1,000 monthly, will see their salaries progressively pruned by a total of one minimal wage, just under Euro500; The number of holidays will be cut and that private sector companies will be allowed to increase workloads by 30 minutes daily without additional pay.

The government proposal also includes significant changes in VAT tax levels and the elimination or reduction of tax deductions. The government, Passos Coelho said, would be “implacable” in persecuting tax evasion.

The prime minister had described Portugal’s predicament as “a moment of national emergency” on his speech Thursday.

The opposition leader told the Legislature Friday, “Not one word on employment, not one word on growth” responding to Passos Coelho’s announcement.

For the Prime Minister the “toughness” of his new proposed measures reflects the unforeseen financial gap of “more than 3 billion-euro” left by the Socialists predecessors.

The Common Front of Pubic Administration Unions, the sector possibly hardest hit by the toughened austerity measures, reacted angrily to Passos Coelho’s announcement, saying the measures were “an affront” to public workers.

The center-right government, which has a majority in parliament, will formally present its belt-tightening proposals to the Legislature on Monday.