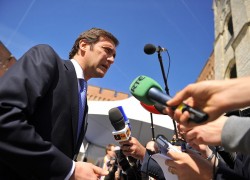 The President urged the incoming Prime Minister Passos Coelho to form a new Cabinet to take office next week, in time for the next European Council, scheduled for June 23-24, in Brussels.

Following negotiations underway, a consensus is expected by the start of next week regarding the formation of a coalition government led by conservative Pedro Passos Coelho (PSD) and  right-wing Paulo Portas (CDS-PP).

Coalition partner Paulo Portas (CDS-PP) should be appointed Deputy Prime Minister. The major contention between the two parties appears to be the number of ministers the new government should hold. The PSD wants 10 appointments while the CDS-PP is aiming for 12.

The Social Democrats (PSD) won 108 seats out of 230 Parliament seats at the June 5 election, defeating the ruling Socialists (PS). They didn’t attain a majority and a government coalition was formed with CDS-PP holding 24 seats.