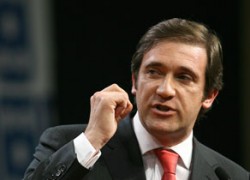 Prime Minister Passos Coelho reminded the Portuguese that the country’s bailout commitments represent a “demanding agenda” and that the effort to fulfill it is “full of sacrifices.” He said he could not pledge either “rapid results” or “soft sacrifices.”

“Our starting point is extremely weak” and “the instability of the European and American financial systems are brakes on a path already full of sacrifices,” he posted on Facebook.

Describing the deficit-cutting task as one of “enormous work,” Passos Coelho promised to “never hide reality” from the public so that “everyone understands the reasons and the objectives of this great collective effort,” he wrote.

On a personal note, Passos Coelho, added that he was leaving on a brief vacation with his family to recover his role as “husband and father.”

Before leaving on vacation, and in spite of the austerity measures underway, his government had unveiled on Friday a four-year “Emergency Social Plan” (PES)  aimed to helping the country’s neediest face the economic crisis.

According to the program, the administration decided to boost by 10% the subsidies for unemployed couples with children.

In another move to help the unemployed and the poor, the administration will provide housing at rents below market prices in conjunction with banks which have repossessed properties.

The new measures also include broadening the services of soup kitchens to assure two meals a day for those in need, increasing the free distribution of basic goods, and bolstering the response of the national emergency hot-line for the poor.

The welfare minister also announce the creation of 20,000 new openings in the public children daycare services and a 10% increase in subsidies to other welfare institutions.