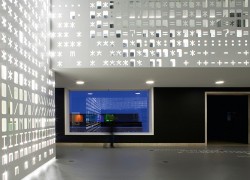 The Portuguese design agency P-06 Workshop, Environment and Communication won the Grand Prix in Red Dot Communication Design Awards 2011, in Berlin, Germany, one of the most important design awards worldwide.

P-06 Workshop, Environment and Communication was selected among 6.468 participants worldwide for ‘Skin’ in the “information/design/public space” category, for the foyer installation and interior illuminated (signage system) developed for the JLCG Architects for the Pavilaho do Conhecimento (Pavilion of Knowledge) at Parque das Nações, in Lisbon.

The Lisbon-based design agency was among the 10 participants that received the distinction of Grand Prix and Best of the Best award at the international Berlin competition.

The renowned communication design prize was awarded for the 19th time at a Red Dot Gala held October 11 in Berlin. The award ceremony was attend by about 1,400 guests.

P-06 Workshop is considered one of the best studios in the world in design environments, with several awards in 2009, 2010 and 2011, including awards in the National Design Awards (PT), Society of Environmental Graphic Design (USA), AIGA (USA), D & AD Awards (UK) and European Design Awards.