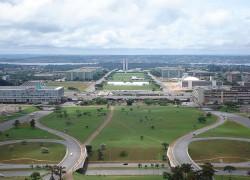 President Obama landed today in Brasilia, the capital of Brazil,  for a five-day tour of Latin America to also include Chile, and El Salvador.  In Portuguese-speaking Brazil, Presidents Obama and Rousseff will renew their commitment to promoting an innovative U.S.-Brazil education partnership to meet the needs of a 21st century workforce.

Governments of Brazil and of the United States also have a long-standing collaboration on biofuels, trilateral cooperation, and eliminating racial discrimination.

During Secretary Clinton’s March 2010 visit to Brazil, the two countries launched the high-level Global Partnership Dialogue and signed three memoranda of understanding–on Climate Change Cooperation, on the Advancement of Women, and on Trilateral Cooperation, among several other agreements.

The goal of President Obama’s trip aims at strengthen future business, educational and  economic relationships with these Latin American neighbors, said President Obama, recognizing that they play an increasing role in the economic future of the United States. This is the first time President Obama visits these countries since he became president.

The 2101 U.S. Census Bureau data has shown that there are 1.5 million Brazilians living in the US, representing a total of 0.7% of the country’s population.  Brazil has a population of approximately 165 million people of various ethnicities. Like the United States, Brazil is a land of immigrants. An estimated 60,000 U.S. citizens reside in Brazil.