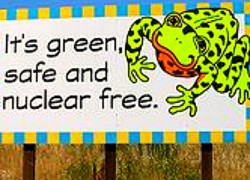 Portugal does not have any nuclear power plants and has no plans to build any. According to a recent survey, around 70% of the Portuguese population is against the production of nuclear energy in Portugal.

The study, by the Portuguese Energy Association (APE), shows that the majority of respondents believe nuclear energy is a risk for public health and safety.

The study titled “Energy in Portugal” was released two months after the nuclear disaster at the Fukushima nuclear power plant in Japan.

In the wake of the crisis at Japan’s Fukoshima plant, Portuguese State Secretary for Energy and Innovation, Carlos Zorrinho, said that “Europe has to be ambitious and take the lead in renewable energies, as Portugal has done”, with almost half the country’s energy needs coming from “green” sources last year.

Referring to the Japanese nuclear crisis and the unrest in the Middle East and North Africa, he remarked that “Europe needs to enhance its internal energy market” and “invest in new-generation renewable energies.”

State Secretary for the Environment, Humberto Rosa, also told reporters recently that nuclear power should be avoided.  It is the kind of energy that when there is an accident “things go very badly and problems last a long time,” he said.

Without its own oil, coal or gas, Portugal is leading Europe’s clean-tech revolution by creating the world’s largest solar, wind and wave farms. Nearly 45 percent of the electricity in Portugal’s grid came from renewable sources in 2010, up from 17 percent just six years ago.

Portugal had once planned to build a 8,000 MW nuclear power plant to be completed by 2000. Plans were delayed until 2004, when the Government of Portugal totally rejected the proposal.