No clear favorite for the June 5 elections – Portugal 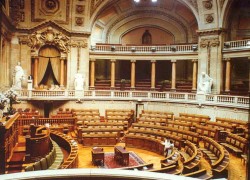 New opinion poll figures released on Wednesday show the two major political parties — the Socialist Party (PS) and the Social Democrat Party (PSD) — in a perfect tie, with 36 percent of the vote respectively, for the June 5 snap elections in Portugal. The poll was conducted by the Catholic University of Lisbon.

Recent polls have given a lead of between two and six percentage points to Passos Coelho ( PSD).  According to a poll by Intercampus released on May 17, Coelho (PSD) led with 36,1 percent over Socrates (PS) with 35,4 percent.

Without a clear favorite, the prospect is that PSD may win the elections by a slight margin and will form a governing coalition with the minority right-wing CDS-PT which holds 10 percent of the vote.

An earlier March poll had predicted that Coelho (PSD) would win the June 5 elections with 46.7 percent of votes over outgoing incumbent Socrates (PS) with 24.5 percent.

On May 16 the European Union finance ministers approved a 78 billion-euro ($110 billion-USD) bailout for Portugal with the European Union and the International Monetary Fund. Portugal is the third EU country, after Greece and Ireland, receiving financial aid from its European partners.