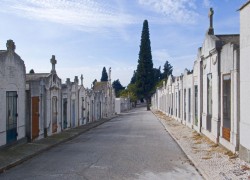 All Saints Day [Dia de Todos os Santos] is celebrated in Portugal on November 1st with a national holiday to honor the dead.

The origin of All Saints’ Day cannot be traced with certainty, but it has been observed on various days in different places around the world. It is a national holiday in many historically Catholic countries, in the Roman Catholic Church and many Anglican churches.

In Portugal, All Saints Day is a day for families to remember their dead with religious celebrations and visits to the cemetery. In some areas of the country children will keep the “Pão-por-Deus” [Bread for God’s sake] tradition by going door-to-door asking for a treat.

The 1st of November is also remember in Portugal as the day Lisbon was struck by the great earthquake of 1755, which left the city in ruins after Lisbon was set ablaze and tsunamis rushed upon the shore into the city.

The earthquake struck mid-morning when many families attended the high religious holiday, inside the city churches, where many thousands were killed.

The quake is thought to have had a magnitude well above 8.5 on the Ritcher scale and an epicenter some 200 kilometers off the southwestern corner of Portugal.