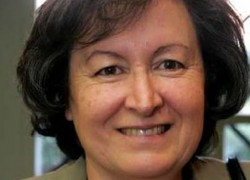 Over the last 25 years, Fundação Luso-Americana para o Desenvolvimento– Luso-American Development Foundation (FLAD) — has established a long list of partnerships and has projects underway to promote Portuguese language and culture at U.S. universities and within American society. FLAD also funds: science and technology research projects and centers; study grants and internship programs; support for participation in and organization of international conferences; initiatives that foster a greater understanding of public policy; and culture and the arts. Portugal’s Prime Minister appointed Professor Maria de Lurdes Rodrigues as President of the Executive Council of FLAD in May 2010.

Transatlantic Relations and Public Policy is Professor Rodrigues specialty at the Department of Political Science and Public Policy, ISCTE-Higher Institute of Labor and Business Studies, University of Lisbon.

The Massachusetts program was organized by WorldBoston a local nonprofit organization which works in conjunction with the U.S. State Department to host delegations of international visitors for cultural and professional exchanges in the Boston area.