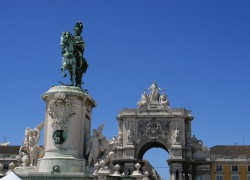 Portugal’s capital city, Lisbon, was voted Friday, November 11, the European City of the Year 2012 by the Academy of Urbanism Awards, based in London, UK.

The award resulted from Lisbon being voted by about 500 academicians who elected Lisbon over Oslo (Norway) and Gothenburg (Sweden).

During July through September, groups of academicians traveled to 15 cities in Europe to assess each one and write an assessment report. These reports were then voted on a short list of three finalist cities.

The report was based on criteria such as local character and distinctiveness, user friendliness, commercial success and viability; environmental and social sustainability, and functionality.

The awards process sought to identify and recognize the best, most enduring or most improved urban environments at various levels of scale and to understand better the processes by which they are nurtured, used and enjoyed.

According to the report, Lisbon is a city which has endured for more than two millennia and over time has faced enormous physical, economic and political challenges. Lisbon provides a unique setting for the expression of Portuguese culture and comprises many influences, reflecting the city’s ability to draw on Atlantic and Mediterranean traditions as well as its links to Brazil and Africa.

There were five awarded categories: The European City of the Year; The Great Town; The Great Neighborhood; The Great Street; and The Great Place.

The winners of The Urbanism Awards 2012 were announced in London, Friday, November 11. Representatives from the three finalists for European City of the Year (Gothenburg, Lisbon, Oslo) were present at the Urbanism Awards Ceremony.