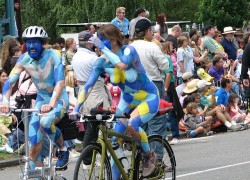 Bikers from all over the world are expected to join the World Naked Bike Ride (WNBR) event scheduled for Sunday, June 26, in Lisbon, Portugal.

Since 2004, the ride’s organizers have been encouraging people to get naked as a way to draw attention to the need to replace fossil fuels with renewable energy.

Similar events have been held in many countries around the world including the United States.

In a statement on the organizations website, World Naked Bike Ride claims, “We face automobile traffic with our naked bodies as the best way of defending our dignity and exposing the unique dangers faced by cyclists and pedestrians as well as the negative consequences we all face due to dependence on oil, and other forms of non-renewable energy.”

However, demonstrations of public nudity are raising some reservations, other than legal questions, and Lisbon Police (PSP) “will have to decide depending on the conditions on the day,” said Santos.  “Let’s do it as naked as possible: swim suit or lingerie,” he added.

Sunday will be a perfect day for a naked bike ride in Lisbon.  Portuguese Meteorology Institute has issued a weather alert anticipating extreme high-temperatures expected to reach a record of 40 degrees centigrade (104 degrees Fahrenheit) in Lisbon over the weekend.