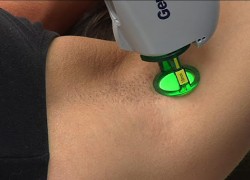 University of Coimbra researcher Carlos Serpa won the 2012 Biophotonics Start-up Challenge at Photonics West, which gathered over 20,000 participants from around the world.

LaserLeap was designed as a non-invasive Class IIa medical device for transdermal or intra-epidermal administration of drugs.

Serpa is thee CEO of new start-up company LaserLeap Technologies,   established in 2011 to address the need for a painless method to deliver medicines through the skin, and promote faster and more effective treatments.

The laser device consists of a pulsed laser used to generate high-frequency ultrasound, which is said to painlessly create a temporary perforation in a patient’s skin – allowing medicine or cosmetics to be delivered effectively before the perforation closes up again after a couple of minutes.

The device has three major markets applications, therapeutic, analgesic and cosmetic, with cosmetic being the initial target for an approximately 3% of the huge global pharmaceuticals market, equivalent to a projected $13 billion.

As the overall competition winner, Serpa will attend the five-day UC Davis Biomedical Engineering Entrepreneurship Academy in July, along with three other runners-up from the Jenoptik-sponsored Photonics West competition.

Most recently, LaserLeap Technologies was the winner of the 2010 Prize AVCRI, Agency for the Valuation and Commercialization of Research Results of the Red Universitaria Ibero-americana de Incubación de Empresas (RedEmprendia / Santander) an Ibero-American Universities competitive award.