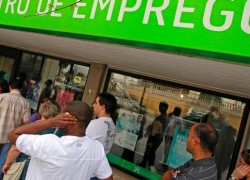 Portugal’s unemployment hit a record level of 14% in the final quarter of last year, according to figures released by the National Statistics Institute (INE) reported by LUSA.

To address the problem, teams of European specialists is expected in Portugal in the near future. The so-called “action teams” will be visiting eight European countries with high youth unemployment rates.

The region worst hit by unemployment is the Algarve where 17.5% of the active population was looking for a job while the Centre region turned in the ‘best’ performance with an unemployment rate of 12.6%.

The government had forecast for the average annual unemployment rate for 2012 would be at 13.7%.

Unemployment rate in Portugal is the fourth highest in the European Union (EU), behind Spain, Ireland and Greece according to figures released by Eurostat Thursday.

Also, according to the INE, Portugal’s economic climate and consumer confidence indicators have sank to their most pessimistic levels ever last month.

The INE revealed that the economic climate indicators in January, calculated through polls in the various business sectors, fell to negative 4.7, continuing their steady decline since October 2010, their worst showing ever, said the INE.