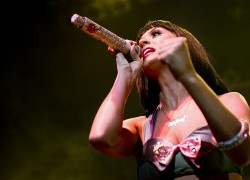 The live event was held Saturday night in Los Angles at the University of Southern California Galen Center.  The Kids’ Choice Awards 2011 was one of the most competitive categories for favorite female singer with four very popular contenders.  Besides Perry, the nominees were Miley Cyrus, Selena Gomez, and Taylor Swift.  Awards were distributed based on a record 200 million votes from Nickelodeon viewers.