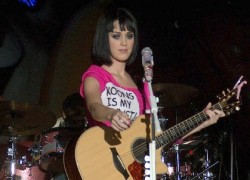 Portuguese American pop singer Katy Perry made the cover of June’s “Vanity Fair” magazine. In her interview for the magazine she talks about her marriage, career, fame, religious views and much more.

She revealed she had a difficult time growing up with her overzealous Evangelical parents that wouldn’t allow their children to listen to secular music or say things like “deviled eggs” or “Dirt Devil” when referring to the popular vacuum cleaner.

Although she has lived away from her parents from time to time, she said she has learned to accept their extreme religious beliefs.

“I think sometimes when children grow up, their parents grow up,” Perry says of her evangelical-minister parents. “Mine grew up with me. We coexist. I don’t try to change them anymore, and I don’t think they try to change me. We agree to disagree…”

About fame and career she said, “I don’t take anything for granted. There are 500 other girls right behind me, and I know that, because I 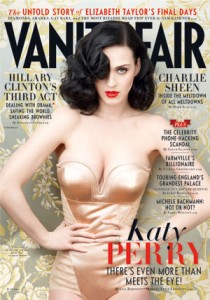 was one of them. I remember what it’s like to be someone who’s always trying to get there — sending out tons of e-mails … trying to connect with some person who could connect me with some other person. And I wouldn’t be working at this pace now if I didn’t truly know that fame is fleeting.”

She also talked about how she feels about her future. She said, “People are buying my songs; I have a sold out tour. I am getting incredible feedback from my music.”  She added “I already know my future evolution, where I’m going.”

About her husband Russell Brand’s views on religion being different from her own, she said, “I come from a very non-accepting family, but I’m very accepting. Russell is into Hinduism, and I’m not [really] involved in it. He meditates in the morning and the evening; I’m starting to do it more because it really centers me. [But] I just let him be him, and he lets me be me.”

The Portuguese American singer was recently announced as the face of Thomas Sabo jewellery as well as the new face and hair of the prestigious GHD brand.