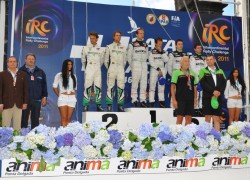 Portuguese favorite Bruno Magalhães, the winner in the Azores in 2010, was leading second place when he was forced to give up the race due to transmission mechanical problems.

The 45 year old international Azorean car driving competition is one of the most important legs for the European Rally Cup of the International Rally Challenge (IRC). The SATA Rallye Azores, is in its second year on the IRC Calendar.

The rally has 19 stages (around 135 miles of competitive racing) — one of the most challenging rallies on the international rally calendar.

The next IRC is schedule for August 26-28 in Czechoslovakia.