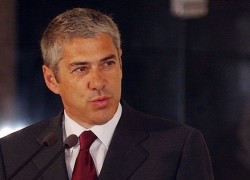 According to an opinion poll released Thursday, outgoing socialist Prime Minister José Socrates is leading in polls six weeks before the elections scheduled for June 5.

Socrates leads with 36.1 percent, 11.6 higher than a last month Marktest poll, while the opposition party, the Social Democrats (PSD) fell 12 point to 35.3 percent.

Socrates resigned last month after his minority government austerity measures were rejected in Parliament by the parties in opposition.

José Socrates was also under pressure from the opposition to request an EU/FMI bailout which he refused and then requested after having resigned.

Portugal is expected to close a deal for a bailout with the EU and de IMF before the June 5 elections. A team of delegates from the EU and the IMF is currently in Lisbon negotiating with the government the terms of the deal to be sealed by mid-May and estimated at 80 billion euros.

Passos Coelho, the leader of the Social Democrats in opposition said he will not block the bailout pact. An earlier poll in March anticipated that he would win the June 5 elections with 46.7 percent votes over outgoing incumbent José Socrates with 24.5 percent.

Socrates and his Socialist Party have governed with a minority in Parliament since the last election, in 2009. He is currently a caretaker prime minister, with limited powers, until a new government is formed.