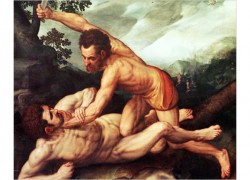 —  Pace, pace, literary critics, comrades, general readers, et al. This book*, purportedly written in a short four months near the author´s end, seems to have been done in a “trance” as has been said. Seen in the context of his symphonic literary output, this is merely the coda consisting of repeated themes, attitudes, platitudes, and railings. Neither fish nor fowl, neither literature nor diatribe, it does not merit the treatment that follows, neither mine nor of anyone else. But it does get treated because Saramago caused a stir world-wide, caused by the Swedish Academy who jump-frogged over the literary establishment in Portugal at the time, and awarded a Nobel Prize to a communist, humbly-born man without a given last name. Atheist, agnostic, non-believer, it doesn’t really matter.

Don’t get me wrong, his literary and also political contribution is considerable, and only after a longer period of reflection will it be known whether, in fact, his name will remain on the books, so-to-speak. It is impossible to write about him, such a polemical character, without seeming to take a stand, of acceptance or rejection, of like or dislike. But, it ought not to be a black-or-white conclusion. While he almost always raises controversy, there have been some literary jewels among his unmentionables. There barely exists a literary review that does not get stuck in his politics, not the Aristotelian type, but in party and ideology. 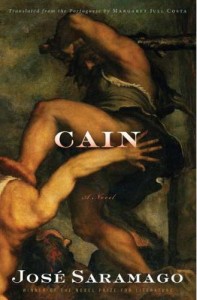 So he has not been welcomed easily into the literary canon, has been given short-shrift, and that is too bad. Critics and others have been hung up on his never-ending sentences, often with no punctuation, avoidance of capital letters, non-use of quotation marks and much else. Those shallow readers do not merit my respect. Then there are those beginning with the President of the Portuguese Republic who withdrew Saramago´s name from the European Literary Prize, with the support of the Catholic Church, for his treatment of religion. That is another question even more important than the mere withdrawal of his name that has to do with the ethos of the country, of which he could be considered to be a victim.

Cain can only with great difficulty be considered a literary creation as such, if we still retain any respect and memory of what constitutes fiction. And, in addition, he creates more confusion by hijacking figures and events from the Old Testament, which both believers and non-believers, have retained in their minds, almost completely de-characterizes them, requiring us to disbelieve or to make tabla rasa of the Bible and Belief, stories and events, in fact, originally destined for Believers. By his tampering he thereby eliminates readers from the Right and Church.

god doesn’t merit a capital letter, nor cain, abel nor the rest of the dramatis personae, and woven into the story we thought we knew is emphasis and focus on fornication, ejaculation, homosexuality, sodomy, orgasms, disrespectful mention of allah’s paradise, language like piss-off, and anachronisms, like aircraft carriers, albeit intentional. A bizarre potpourri.

Saramago complained that readers are mistakenly looking for double entendre, when he was only interested in literal meaning. Therefore, he eliminates symbolism, metaphor, and the use of parables, for example, even of poetry as an approach to the story or interpretation of this biblical event. The rule of heaven is a parody, a joke, and god (his god) is irresponsible and cruel – don’t trust him. Saramago could have written a short essay, and in so many words, transmitted this message of his, without having to wrap it up in the swaddling clothes of a false fiction.

Granted, the idea of writing a story around the Cain and Abel story was and is a fascinating initial idea, it has been done before, better, but it is not the point here to review another book that I wish might have been written. His characters without characterization are adam and eve expelled from the garden of eden, the wanderings of cain, sex with lilith, adam’s first wife, visits to sodom and gomorrah, arriving at the ark with noah, all along into which he inserts his gratuitous and almost frivolous commentary.

But there is good reason here to mention an interesting episode that contrasts with Saramago’s opposition and hostility to the Church, from Cervante’s Don Quijote. Cervantes was an Erasmist, meaning he also was opposed to the Catholic Church in his day, and his daring treatment of this attitude was published in the Quijote under the threat of repression or even of execution by the Church and the Inquisition. But Cervantes expressed himself with art, humor and an elevated literary technique, in an organically created masterpiece. Early in his narrated life, Quijote the character, is seen reading numerous books of knight-errantry, in which he saw potential knights getting knighted in an “official” ceremony. So early in the novel before he sets out on adventures to “right the wrongs in the world” (like Saramago), he perceives that he must be knighted. The idea occurs to him while he is a guest in a rural inn full of muleteers and prostitutes. He calls on the inn-keeper to officiate. Laying his sword on his shoulder, watched carefully by the “princesses”, the inn-keeper reads “benedictions” during the ceremony from a “bible”, which really is his accounting ledger, and thus very cleverly Cervantes achieves his aim in an elegant manner. Cervantes is revered and read four-hundred years later, an important writer who through this type of  “protest” created a new approach to God, with a capital  “G”, and the birth of the Protestants. And without indulging in cheap and vulgar means.

Only medical doctors save lives, not god, the rest is literature, Saramago said. How do the Jews base their faith on the Old Testament, he asks. I write not to entertain, but to cause uneasiness [desassossego in Portuguese], but not the Pessoan variety. These are some of the “questions” that come up.

An even bigger point is what constitutes fiction. It may be old-fashioned to say it just like this, but literary fiction usually has a beginning, a middle and an end, some kind of a story line, development or plot, round characters and shallow ones. We do not find this here, not even an entertaining variant.

To end on a more positive note, Saramago has written excellent fiction worthy of our most deep respect. Everyone has his favorites, I would single out The Year of the Death of Ricardo Reis, Baltasar & Blimunda, The Gospel According to Jesus Christ, Blindness, and All the Names. Begin here to give Saramago a fighting chance, and the benefit of a doubt.

John Howard Wolf, an American expatriate in Portugal since 1977,
is a contributor to the Portuguese American Journal.