José Carlos Príncipe is the first Portuguese researcher to receive the “IEEE Neural Network Pioneer Award.” The Institute of Electrical and Electronics Engineers (IEEE) is the world’s largest technical association.

The award will be presented on 3rd August during the 2011 IJCNN (International Joint Conference on Neural Networks) gala dinner in San José (CA).

The IEEE presents this award annually to researchers who have made a significant contribution to science over a period of 15 years. The most important international founders of Computational Intelligence in the last 20 years are among the previous candidates.

José Carlos Príncipe is an international pioneer in the world of computational neuroengineering, with research that opens doors for the prevention of epileptic seizures or to allow paraplegics to interact with the world using robots.

José Carlos Príncipe uses algorithms and processing models to understand how the human brain works. Based on this information, his research opens new doors for the prognosis of diseases, such as preventing epileptic seizures. Understanding thought processing algorithms can also decode how the human brain moves certain parts of the body, helping tetraplegics move their upper limbs with the aid of robots that imitate human movements.

Established in 1991, the “IEEE Neural Network Pioneer Award” is considered the most important award in the field and is presented to individuals who have made pioneering contributions over a period of at least 15 years. The prize includes a $2,500 honorarium. 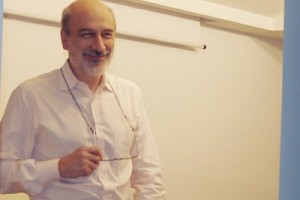 Dr. Príncipe holds degrees in Electrical Engineering from the University of Porto (Bachelor), Portugal, University of Florida (Master and PhD), USA and a Laurea Honoris Causa degree from the Universita Mediterranea in Reggio Calabria, Italy. Dr. Príncipe interests lie in nonlinear non-Gaussian optimal signal processing and modelling and in biomedical engineering. He created, in 1991, the Computational NeuroEngineering Laboratory to synergistically focus the research in biological information processing models. He recently received the Gabor Award from the International Neural Network Society for his contributions.

Dr. Príncipe is a Fellow of the IEEE, Fellow of the AIMBE, past President of the International Neural Network Society, and Past Editor in Chief of the Transactions of Biomedical Engineering, as well as a former member of the Advisory Science Board of the FDA. He holds 5 patents and has submitted seven more. Dr. Príncipe was supervisory committee chair of 50 PhD and 61 MSc students, and he is the author of more than 400-refereed publications. He has been distinguished several times during his career, including the more recent Gabor Award, from the International Neural Network Society (2006).

1987 – Joined Department of Electrical Engineering at the University of Florida

2005 – Awarded the Laurea Honoris degree from the Università Mediterranea in Reggio Calabria, Italy.

2006 – Won the “Gabor Award” from the International Neural Network Society

2008 – Honorary Doctorate from the University of Maranhão (Brazil)

• License holder for 18 patents (with a further six awaiting approval)

• Author of seven books (four of them edited)

• Participated in over two hundred conferences