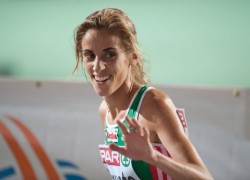 Portuguese marathon runner, Jessica Augusto, made her debut this Sunday at the New York City Half Marathon wining 7th place with 1:10:00.  This was her last test in preparation for the 2011 London Marathon debut, taking place April 17. In New York, Augusto stayed with the leading team for the first half of the race which was won by Caroline Rotich from Kenya.

Jessica Augusto holds many titles including the European Cross Country Championship. She has represented Portugal in three World Championships in Athletics and at the 2008 Beijing Olympics. In 2009, Augusto won the Great North Run half-marathon in 1:09:08. She was the 2011 Roma-Ostia Half-Marathon runner-up.