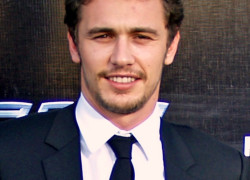 Portuguese-American screen actor, James Franco, born in Palo Alto (CA) from a Jewish mother and a Portuguese-American father, was profiled in detail by Zimbio this week. Besides being on screen, the young actor likes to paint, enjoys writing (published a book), and attends simultaneously  Columbia University,  where he is completing an MFA in writing,  NYU for a Master’s in film making,  and  Yale University for a PhD in English. He is also a film director in training. This week James Franco returned to his home town to film his mom’s play “Metamorphosis.”

His most  recent movie “127 Hours,” was considered one of 2010’s best.  Most recently he hosted the 2011 Academy Awards (Oscars) and was given the star credit for the film, but lost the nomination for Best Actor to Colin Firth.