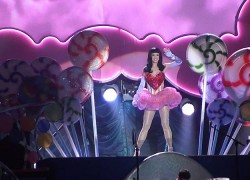 Katy Perry is always up to something these days.  Now she has been accused of  emulating Lady Gaga on  her new video for ‘E.T.’

Katy released her new video last week, and it was immediately compared to Gaga’s recent video for ‘Born This Way’.

Both videos feature extra-terrestrial themes and ideas of re-birth, as well as plenty of quite weird and grotesque imagery.

TheWeek.com says, “Some commentators and Gaga fans were quick to note an uncanny resemblance to the “Born This Way”

Celebuzz also found some similarities to other pop star videos: “Is it just us, or is this video like the love child of Lady Gaga‘s “Born this Way” and Ke$ha‘s “Blow”? With each having some level of space imagery, crazy colors and the animal/human transformation, we think this video feels curiously similar to the other two.”