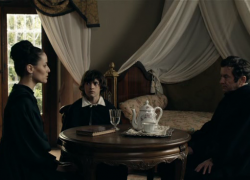 “Mysteries of Lisbon” was premiered in the United States in August and was distributed nationwide by Music Box Films.

Ruiz’ credits include Time Regained, his critically acclaimed adaptation of Proust’s Remembrances of Things Past and Genealogies of a Crime, both starring Catherine Deneuve, and Three Lives and Only One Death starring Marcello Mastroianni.

IPA is an organization of American and foreign journalists based in the United States which recognizes achievements in the fields of cinema, television, radio and new media. Members include working freelance and staff writers, bloggers, broadcasters, and photographers from more than 20 different countries as well as the US and territories. Originally known as The Golden Satellite Awards, the name was changed to Satellite Awards in 2003.