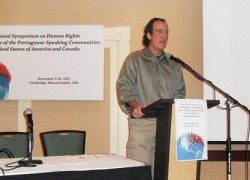 – Over 40 researchers, educators, community organizers and policy makers, from Portugal and the Azores, the United States, Canada, Brazil and Cape Verde, gathered November 9-10, in Cambridge, MA, at the 1st International Symposium on Human Rights and Quality of Life in the Portuguese-Speaking Communities in the United States and Canada, to address concerns related to social, educational and political issues.

The conference, attended by over 120 participants, was sponsored by the Government of the Azores, through the Department for the Azorean Communities (DRC), in partnership with MAPS (Massachusetts Alliance of Portuguese Speakers); Lesley University (MA); Boston College (MA); Princeton University (NJ) and the Luso-American Development Foundation.

For Graça Castanho, director of the DRC, the main organizer of the conference, the symposium aimed to gathering representatives from different Portuguese-speaking communities in the United States and Canada to discuss common problems such as deportation, education, health and community leadership and finding common solutions.

In a statement to the Portuguese American Journal, Castanho said, “The main objective was to bring together Azoreans, Brazilians, Angolans and Capeverdeans to call attention to community concerns and create adequate measures and policies to best implement those measures. For the Government of the Azores it was an honor to having organized this huge and successful event, in partnership with so many experts and institutions, with such an impact in the quality of life in the Azores and in our diaspora.”

On his opening address, André Bradford, Regional Secretary of the Presidency of the Government of the Azores, said the event had a particular significance considering the difficult times we live today. He said, “The current context of economic and financial difficulties, experienced in Europe, but also here in the United States, with important effects on employment, on the social protection system and on the quality of life in general, introduces new pressures on migrant communities.”

Craig Mello, recipient of the 2006 Nobel Prize in Physiology and Professor of Medicine at the University of Massachusetts, was the keynote speaker. He spoke of human rights and quality of life from a scientific perspective. A grandson of Azorean immigrants, he also spoke of the hard working ethic values he owes to his Portuguese heritage which, he said, had shaped his character.

One of the high points of the conference was the intervention by Thomas Hodgson, Bristol County Sheriff, responsible for the Bristol County detention center that processes deportations to the Azores. Addressing the topic of transitional issues for deportees and their families, he spoke of his working with the Government of the Azores in the implementation of initiatives aimed to processing deportations in a more compassionate human way.  The Sheriff is working closely with the Government of the Azores and federal authorities on an amendment to the existing legislation on deportation.

Others spoke of how the current United States deportation laws and procedures are violating the most basic human rights of deportees and their families. Deportations are having a negative effect in both the local resident immigrant communities and the communities of destination, they said. They also urged that more action needs be taken aimed to protecting those affected by deportations from having their human rights violated.

Last year, 61 Azorean-born immigrants in the United States were deported to the Azores, most of them legal residents deported for minor misdemeanors. Those deportees are Azorean-born children of legal immigrants from the Azores that were not naturalized American or Canadian citizens at the time they broke the law.

Because current US  deportation laws are disproportionately harsh and can be applied retroactively  many are being deported for minor misdemeanors which took place many years ago and for which they may have not served time. Once deported, individuals are banished for life from entering the United States.

According to the Bristol County Sheriff ‘s office, in 2008 there were 66 deportations, in 2009 the number of deportations decreased to 32, and although the number had increased slightly in 2010 to 43, it was far from the numbers registered in 2008.

Since 1989, about 1,000 Portuguese nationals were deported to the Azores, most of them males. Since 2000, about 465 were deported to the Azores. Data presented at the conference showed that, as of September 12, 2011, during the current Barack Obama administration deportations from the United States have soared to an all-time high of 1.06 million individuals of all nationalities.

The symposium concluded that more action needs to be taken to expand social networking and to promote collective partnerships in order to protect individual human rights and to improve the quality of life of the Portuguese-speaking migrant communities in their respective host societies.

Some of the actions include an appeal to lawmakers for an amendment to the current United States deportation laws and also actions aimed to preventing further deportations through information regarding immigration law, citizenship and individual rights.

The 1st International Symposium on Human Rights and Quality of Life in the Portuguese-speaking Communities in the United States and Canada closed with the signing of a protocol of cooperation between the Department for the Azorean Communities (DRC) and 30 community based organizations in the Azores, United States and Canada with the goal of creating an international social services network which goal is to provide support for the migrant populations in the Azores and the Azorean diaspora.