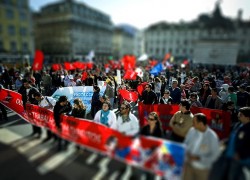 Hundreds of thousands of people around the world participated on May Day protest marches claiming for labor rights and social justice. In Portugal, in spite of the rain, tens of thousands also marched in protest in 45 different cities around the country.

According to CGTP labor union leader Manuel Carvalho da Silva, “Never has social protest been more important.” He also said, “We will never accept being colonized,” referring to the negotiations underway between Portugal, the European Union and the International Monetary Fund for a bailout that is expected to total US$116 billion.

Air traffic workers in Portugal staged a two hour slowdown on April 27, in the five major cities of Lisbon, Porto, Faro, Ponta Delgada and Funchal. Similar strikes are scheduled for May 4, 11, and 18. Labor unions have also called for workers to join a general strike scheduled for May 6 and to march in protest on May 19.

The protests are being organized by the two largest national coalitions of labor unions, the CGTP representing 727,000 workers in 81 unions, and the UGT with about 500,000 members in 58 unions.