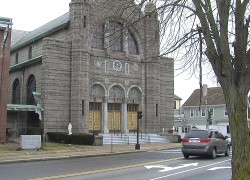 The Diocese of Fall River, MA, announced that the 150 year old St. John the Baptist Parish, the oldest Portuguese parish established in North America, will close soon due to financial problems, a significant decline in parishioners and the building falling apart.

According to the announcement, the New Bedford struggling parish will merge with another Portuguese parish, the Our Lady of Mount Carmel, on Bonney Street.

The time for the merging has no been establish, said Rev. John Oliveira, pastor of both parishes. A committee will be formed to determine when the church will actually close.

St. John the Baptist Parish was established in 1871 by the Archbishop of Boston, the Most Rev. John J. Williams, with the Rev. João Inácio de Azevedo Encarnação serving as pastor. The current church building was dedicated in 1913, after being destroyed by fire in 1908..

St. John the Baptist’s parishioner population has been dropping for more than a decade due to demographic shifts and the slowdown in immigration from Portugal.

Currently the population of New Bedford is estimated at 95,072, making the city the 6th largest in the state. About 40 percent of New Bedford residents are of Portuguese ancestry. The Portuguese connection with New Bedford developed from early eighteenth-century whaling. In the 1860s, they comprised up to 60% of whaling crews. From 1870 to 1924, residents of Madeira and mainland Portugal joined Azoreans in looking for opportunities in emerging industries, particularly the textile mills, of New Bedford.