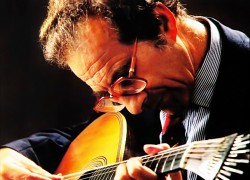 The two reissued LP vinyl albums by Paredes are Guitarra Portuguesa from 1967 and Movimento Perpétuo from 1971.

The albums were reproduced in the original covers from the first editions launched 40 years ago. Only one thousand copies of each reproduced album were issued.

Fred Somsen, Director of European Affairs for Drag City, a Portuguese national and a great fan of Carlos Paredes, was responsible for the reproduction of the of Portuguese guitar classic albums.

Carlos Paredes was born in Coimbra in 1925, the son of Artur Paredes also an accomplished guitar player. Paredes began playing guitar at the age of four and started his music career at the age of eleven. A composer, he wrote Fado music and a number of film scores.  He is credited with popularizing Portuguese guitar music internationally in his lifetime. A member of the Communist Party, during the Salazar regime he was arrested and served time in solitary confinement. Considered to be one of the most talented Portuguese musicians of his generation, he was known as the “Man with a Thousand Fingers”. He died in 2004 at the age of 79.