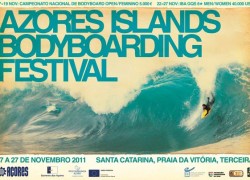 The Azores Surfers and Bodyboarders Union (USBA), in partnership with the Terceira Surf Association and the Portuguese Surf Federation, is hosting the Azores Islands Bodyboarding Festival 2011 to be held November 18-20 at Santa Catarina, Praia da Vitoria, Terceira island. Santa Catarina is known as the “European Hawaii”.

Sponsored by the Government of the Azores, the event is part of the International Bodyboarding Association (IBA) Global Qualifying Series.

Over 150 bodyboarders, male and female from around the world, were expected to participate. The winner will be awarded a $40,000USD prize.

The event is followed by the Azores Pro 2011, to be held November 22-27, also at Santa Catarina beach, with the participation of the world’s best riders.

This second last event on the 2011 IBA World Tour in Azores has been granted 6 Star Global Qualifying Series status after the Knights Beach Pro in South Australia failed to secure government funding to stage the event.

This will be a vital event for riders on the Global Qualifying Series circuit and will be the last of the 6 Star events in 2011.