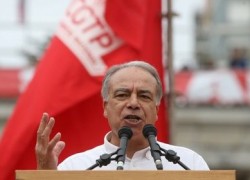 Tens of thousands of government and private sector workers demonstrated Saturday in Lisbon and Porto, Portugal, pledging to walkout on October 20-27 in protest against the government austerity measures underway.

Protests were organized by CGTP, the country’s largest trade union federation, which represents 727,000 workers in 81 unions.

He said, “It is time to change course,” and “”We need a political alternative,” as he called for a “week of action” against measures that brought “impoverishment and injustice” to the working.

“When our rights are attacked, when poverty and injustice are rising, then our fight has to be generalized. It has to be everyone’s struggle,” Carvalho da Silva told protesters.

He also said, “When we evaluate the first 100 days of the new government, it’s a disgrace,” accusing the center-right Prime Minister Passos Coelho of having no solutions for the country’s problems.

The rally was the first public demonstration since the new elected Prime Minister took over a center-right coalition government, following a snap election held June 5, which ousted a Socialist lead administration.

The Socialists had agreed with the European Union, the European Central Bank and the International Monetary Fund, on a 78 billion-euro ($104 USD billion) bailout to reduce the county’s budget deficit.

The terms of the agreement also called for structural reforms such as tax increases, spending cuts, labor law reforms and the privatization of public holdings.

The measures are forecast to cause a deep recession this year and next, and a rise in unemployment from the current level of more than 12 percent, which is already the highest in three decades.