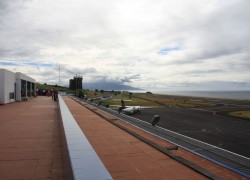 Faial islanders are circulating an online petition demanding the expansion of the Horta airport runway. The initiative aims at reaching 15 thousand signatures as many as the whole population of the island.

Posted online two weeks ago, the petition claims that a longer runway is needed from the current 1,700 meters to at least 2,000 meters in length.

The argument is that apparently pilots flying TAP and SATA aircrafts fear landing in Horta, due to the small size of the airport runaway, a situation that could put “at risk the lives of many passengers”– the petition says.

The request came shortly after a TAP Air Portugal commuter aircraft, flying between Lisbon and Horta, had to make four attempts to landing to due the small size of the runway and crosswinds.

The expansion of the Horta airport runway is an old Faial demand, but the work never came forward because of the high costs involved.

Horta Faial Airport is located in  Castelo Branco on the south east coast of the island of Faial in the Azores — 9.5 km from city center of Horta, on Faial.

The Airport is vital to the economy of the region and connects to smaller aerodromes in the outlying islands, as well as to Lisbon Airport on the mainland.