The Parliamentary Committee for Education, Science and Culture is holding a hearing, on July 19, with a committee of private citizens working with Lisbon City Hall, to promote Fado’s candidacy at UNESCO.

After a process started six years ago, the city of Lisbon submitted its request to UNESCO on July 2010. UNESCO’s decision will be revealed on November 2011. Fado is considered Lisbon’s song, which makes Lisbon one of the few cities in the world with its own musical style, one that has come to symbolize the soul of the entire country. 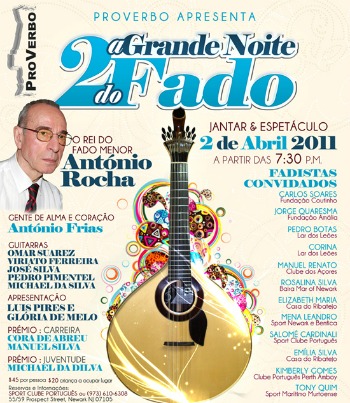 Fado music is present anyplace in the World where the Portuguese are present. The above poster publicizes
a “Fado Night” that took place in Newark, NJ
on April 2011. Among the participant singers were several that came from Portugal but it also included
many Portuguese American fado singers.

At the previous Legislature, the Portuguese Parliament had unanimously adopted a resolution supporting the initiative which goal is to preserve Fado’s cultural legacy.

An advisory board, especially created for the purpose, includes famed Fado singer Carlos do Carmo, Sara Pereira, Rui Vieira Nery and Salwa Castel-Branco. Carlos do Carmo is currently working on a world tour of concerts to promote the initiative.

While its origins are unknown, historians believe Fado is a blending of songs by Portuguese homesick sailors,  African slave songs from Brazil, and ancient  Moorish ballads.

Recently, a Fado museum was created in Lisbon to preserve Fado’s archives and plans are underway to introduce Fado in the national curricula throughout the country’s schools.