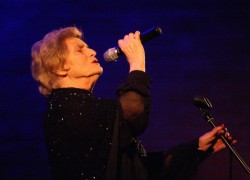 Portuguese veteran Fado singer Celeste Rodrigues and a star cast of artists coming from Portugal, will perform at the “Fado: From Lisbon to New York” concert to be held January 24, at 8:00pm, at Carnegie Hall, Stern Auditorium/Perelman Stage, in New York City.

According to US-based MDFADO Productions, promoter of the event, the performance will recreate a typical Lisbon tavern ambience. “The idea behind this performance is to literally transport the audience to Lisbon, specifically to a Fado house, and give them an unforgettably ‘intimate’ performance,” said Michael da Silva, concert producer.

Born in 1923 in the neighborhood of Alcântara, Lisbon, Celeste is the younger sister of Amália Rodrigues, Portugal’s all time celebrated “Queen of Fado.” Celeste, also an accomplished Fado singer, always stood in the larger-than-life shadow of her older sister Amália, with whom she remained very close through the years.

The three singers will perform poems and musical compositions by Jorge Fernando, currently considered one of the most prolific Portuguese poets.

For more information visit www.carnegiehall.org . For tickets contact CarnegieCharge at 212-247-7800, or the Carnegie Hall Box Office at 57th Street and 7th Avenue, NYC.