Essay: The Barcelos Cock and The Waste Land
– by George Monteiro 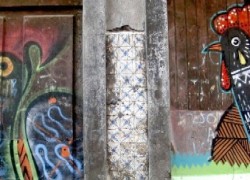 In “What the Thunder Said,” the fifth and final section of The Waste Land, T. S. Eliot’s epochal poem of 1922, there is a mysterious and intriguing (albeit brief) scene in which moonlight shines over a deserted mountain chapel where “only a cock” stands “on the rooftree,” crowing “co co rico co co rico.” Lightning flashes and a “damp gust” brings “rain.” Given these indications, in a place of death, decay and abandonment, it is tempting to speculate, as have others, regarding the purpose and thematic significance of this crowing cock.

There are two standard thematic interpretations of that purpose. They are summarized by B. C. Southam in A Guide to the Selected Poems of T. S. Eliot (1968):

Eliot may be drawing upon two traditions of the crowing cock. Firstly, the story told In the Gospels: that as Christ foretold, his disciple Peter denied acquaintance with him when Christ was under arrest before his trial; this happened three times, and when a cock had crowed twice, Peter broke down In tears at his own shame and cowardice. In this context, the crowing of the cock is seen as part of the ritual preceding the death of Christ, salvation for mankind.

The second tradition is that of the cock as “trumpet of the morn,” a signal to ghosts and spirits that as darkness fades they must return to their homes, as the Ghost of Hamlet’s father disappears at its call in Hamlet I.i. The chapel is now empty of nightmares and apparitions.

These explanations have been accepted widely, often surfacing in some form or other, for example, in the editorial notes provided in such popular textbook-anthologies as American Literature: Their Makers and the Making (1973), and The Norton Anthology of American Literature (1989). 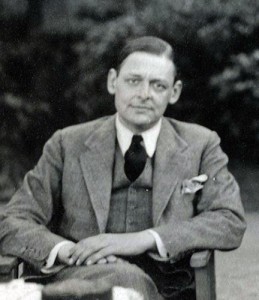 Still other explanatory sources for Eliot’s crowing cock have been proposed. As long ago as 1956, to the existing explanations for Eliot’s odd image, Grover Smith, Jr. (T. S. Eliot’s Poetry and Plays: A Study in Sources and Meaning), added one with an odd wrinkle. “The cock, crowing enigmatically in Portuguese while perched on the rooftree,” writes Smith, “has the power to disperse the darkness and the shapes that walk by night.” It is a pity that Smith does not expand on his suggestion, for subsequent critics have been dubious about the nationality Smith assigns to that cock on the rooftree. In 1970, in a general criticism of Smith’s book, C. B. Cox and Arnold P. Hinchliffe, in their “Introduction” to T. S. Eliot, ‘The Waste Land’: A Casebook, write: “In our opinion Grover Smith has carried” his search for sources and allusions “to extravagant lengths.” Their example is that readers are told that “the cock, crowing enigmatically,” is crowing “in Portuguese.” In due course, dutifully footnoting Smith’s notion, Timothy Materer, in Notes and Queries (1977), nevertheless proposes that the cock cries in French, for Eliot had “in mind Edmond Rostand’s verse play Chantecler (1910).” The suggestion that the title character in Rostand’s Chantecler is Eliot’s source for the crowing cock is endorsed by Robert Crawford in The Savage and the City in the Work of T. S. Eliot (1987), noting further that Eliot “probably” saw the play in Paris “where it had been a hit in the winter of 1910,” though it was also performed in Boston in 1911. (Notably, Materer’s suggestion finds its way in 1990 into the fifth edition of B. C. Southam’s Student’s Guide to the Selected Poems of T. S. Eliot.) Robert L. Schwarz also questions Smith’s early notion. 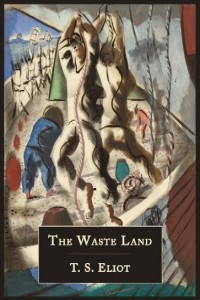 “Grover Smith claims that the cock crows in Portuguese,” he writes in Broken Images: A Study of The Waste Land (1988), “but the crow is as likely a variant of the French cocorico.” “Whether it conceals an allusion is not known,” he continues, “however, Eliot may have used it simply for the sound — cock-a-doodle-doo would have been ludicrous.”

Perhaps the matter can be taken a bit further, for Smith’s notion about Eliot’s crowing cock’s being “Portuguese” might not be as obviously incompatible with Schwarz’s suggestion that the crow can just as readily be “French” as it seems at first or, for that matter, with Materer’s suggestion that the crow derives from Rostand. There is a contemporaneous analog for that wasteland cock and its cry that brings the “French” and the “Portuguese” together. In the July 1922 issue of Contemporanea, published in Lisbon, appeared a selection of texts and scores from Trente-Six Histoires pour amuser les Enfants d’un Artiste, a work by the Portuguese composer Francisco de Lacerda (1869-1934). Lacerda, who had returned to Lisbon in 1921 after a quarter of a century in Paris where he had achieved considerable renown as a pianist, musical conductor, and composer, had not completed this major work, begun as early as 1902. Among the selections he made available to the editors of Contemporanea was “Le Coq et son Ombre.” In the lyrics reproduced with the score on page 141 the cock’s crow is given as “Kó—kó—ri—kó.”

This evidence does not establish Lacerda’s pleasant children’s song as one of Eliot’s sources, of course, but it is teasingly suggestive. Except for the transcription with a “k” in place of Eliot’s hard “c,” the sound the cock makes in the song is identical to the sound transcribed in the poem. And while Lacerda’s text, though published in a Portuguese journal, is in French, the sound of the cock’s crowing is the same in both languages. If this is so, should we then try to determine whether the cock’s crowing as it appears in Eliot’s poem is either Portuguese or French?

But there is another matter that calls for our attention. In an earlier version of Eliot’s poem (The Waste Land: A Facsimile and Transcript of the Original Drafts, published in 1971), the lines presenting the crowing cock read: “Only, a black cock stood on the rooftree / Co co rico Co co rico.” While dropped in the final version, the attribute “black” becomes especially suggestive when “black cock” is considered in a Portuguese context. One of the more familiar traditional Portuguese symbols is the so-called “galo de Barcelos,” which is to say, the cock associated with the municipality of Barcelos. In effigies of various sizes, this (usually) black rooster has over time become ubiquitous in Portuguese shops, especially those catering to tourists and other travelers. It is not known whether it was this emblematic Portuguese black rooster that first appealed to Eliot. 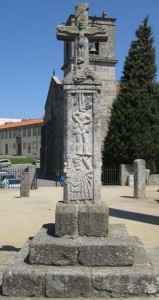 “Padrão do Senhor do Galo” supposedly of the XIV century, in Barcelos, depicting the legend of the resurrecting cock that saved the hanging man.

It could have been, especially if Eliot also knew something of the European legend that in Portugal is associated with the Barcelos cock. In its numerous versions (including comic ones) the legend seems to be a legend of resurrection. Traced to other cultures and to earlier times, it can be sketched paradigmatically. A cooked rooster is set before a magistrate or lord. When an individual accused of some crime or someone representing a condemned person comes to plead before this figure of authority, the dead cock astonishingly comes back to life and begins to crow. This miracle is taken as “proof” that the accused or condemned individual is actually innocent. The cue for the rooster’s resurrection is almost always a statement by the accused that as “proof of his innocence, a roasted cock, sitting there on the judge’s table waiting to be eaten, will raise itself up and crow.” This legend is well-known not only in Portugal but in Spain and France as well.[1] Indeed, so wide-spread did it become, according to Maurits du Meyer, in “La Légende du Pendu,” that it has served allusively as the basis for numerous paintings and illustrations. Each of these versions of the legend ends on a comedic note, that is to say, everything works out for the best. The falsely accused, who has sometimes been left hanging to die, is always saved by the crowing of the resurrected cock.

But can the same overall question that has been asked about intention in The Waste Land — does the poem end on a note of hope for resurrection? — can be asked about Eliot’s specific use of the crowing cock. Moreover, is the meaning of Eliot’s poem consonant with the purport of this almost always comedic legend, and therefore itself intended to be comedic? In short, will those bones rise when the lightning flashes and when a damp gust brings rain, or is it all, for human beings, merely a meteorological show, a misleading show of false signs? Or rather than presaging resurrection, does not this wasteland cock crow over a scene of death, over dry bones in tumbled graves, before an empty chapel with swinging doors and no windows, a desolate scene devoid of human voices? Does not this rooster, after all is said and done, sound its note out only to empty spaces? 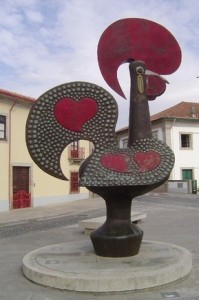 The “galo” in a street of Barcelos

In a second book on Eliot, one entirely devoted to an interpretation of The Waste Land, Grover Smith returns to the matter of Eliot’s crowing cock in The Waste Land (1983). Now he, too, notes that in an earlier version of the poem Eliot refers to a “black” cock, but then, oddly, drops the subject, saying nothing further about the cock’s blackness. Instead, he moves on to suggest that Eliot’s reference to the crowing cock may be linked to the French writer Jean Cocteau. “Called ‘le Coq’ after the broadside-review he named for himself, this enfant terrible of culture devoted himself to crowing the old out, the new in,” writes Smith. In fact, “his current fame rested upon ever more extravagant demonstrations of the startling; but new in England was a translation of Le Coq et l’Arlequin, about his operatic collaboration with Picasso.” Then, to further his case for the “Frenchness” of the reference, Smith decides, rather surprisingly, that ‘Co co rico co co rico’ is the shout of a bantam not a cock, apparently.” Perhaps bowing to the skepticism expressed by some of his earlier readers, he no longer seems to subscribe to his earlier notion that the crowing by Eliot’s cock is done enigmatically in Portuguese. (Incidentally, Horácio Marçal also offers different transcriptions for the rooster’s crowing in Portuguese children’s rhymes: “qui-que-ri-qui,” “tico-tirico-tico,” and “cerobico, bico, bico.”)

Maybe Smith too readily gave up his original idea concerning the crowing figure in Eliot’s poem. Although it is unlikely that anyone will turn up that piece of undeniably conclusive evidence that will pin Eliot’s reference down to a single, incontrovertible source, there appears to be enough circumstantial evidence to support the notion that Eliot’s cock’s crowing is done in Portuguese.

The Portuguese American Journal is ranked by GoogleNews