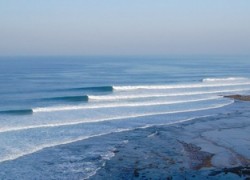 The village of Ericeira, mailand Portugal, is now officially a World Surfing Reserve (WSR), becoming the second WSR overall and the first in Europe.

The Ericeira World Surfing Reserve was officially endorsed on October 14 by Portuguese President Aníbal Cavaco Silva and was acknowledged in the Portuguese National Assembly.

The President acknowledged the significance of preserving the surfing coastline for not only the thousands of Portuguese surfers, but also for the vitality of Portugal’s economy, the health of the coastal and marine environment, and maintaining a high quality of life for residents.

“When we talk of surfing at our beaches, we are talking about much more than a sport: we are evoking a lifestyle and a relationship with the sea that is very Portuguese, a relationship that is natural and ancestral,” the President stated. “The designation of Ericeira as a World Surfing Reserve should serve as an example to stimulate everyone to aspire to a more environmentally healthy country with an excellent standard of living.” He said.

“The formal recognition of the value of the Ericeira surfing coastline from Portuguese dignitaries is directly in line with the goals of World Surfing Reserves,” said Will Henry, founder of Save The Waves and member of the World Surfing Reserves Vision Council. “This awareness must then be met with the long-term commitment to coastal and marine protection and the active stewardship of Ericeira’s remarkable surfing resources.”

Local groups that co-sponsoring the reserve include the Municipality of Mafra, Association of the Friends of Coxos Bay, Ericeira Surf Club (ESC), and Salvem o Surf, as well as many other organizations and individuals.