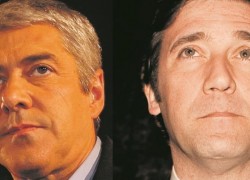 The campaign for Portugal’s snap June 5 election has entered its final and decisive week with opinion polls showing the Social Democrat Party (PSD) leading with 37 percent of the vote over the Socialist Party (PS)  down from 36 percent to 32 percent of the votes. The pool was conducted by Intercampus between May 25 and 29.

Although the poll shows PSD breaking the technical tie of 36 percent with PS, for the first time since the daily poll began last Tuesday, May 24, no party is likely to win an absolute majority.

After six years of socialist rule, the most recent opinion polls continue to place the ruling Socialist Party (PS), led by José Socrates,  and the Social Democrats (PSD), led by Passos Coelho, very close to win or lose the elections, with nearly  one-third of voter preferences, respectively, while about one-quarter of the electorate remains undecided.

The conservative Christian Democrats (CDS-PP) led by Paulo Portas is set to attain about 10% of the votes and could became the post-election king-maker if asked to form a center-right alliance with the PSD, if the social democrats win.

On May 16 the European Union finance ministers approved a 78 billion-euro ($110 billion-USD) bailout for Portugal with the European Union and the International Monetary Fund. Portugal is the third EU country, after Greece and Ireland, receiving financial aid from its European partners.