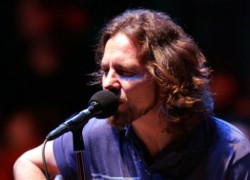 Eddie Vedder, of Seattle rock band Pearl Jam, is releasing “Ukulele Songs” a solo album consisting only of songs performed on the ukulele.  The ukulele is a small four string guitar introduced in America by Portuguese immigrants from Madeira. The album will be out on May 31st.

Vedder will release sixteen songs, including thirteen original songs and three covers. “Ukulele Songs” will be Vedder’s follow-up to the “Into the Wild” soundtrack and will feature original tunes and covers performed on a ukulele. Guest appearances include Chan Marshall of Cat Power and Glen Hansard.

By announcing the release of ukulele solo album, 46-year-old Eddie Vedder has followed in the footsteps of other ukulele fans such as Tiny Tim, George Formby, Amanda Palmer, and Jake Shimabukuro among others.

Besides 12 originals, the album will cover Everly Brothers’ “Sleepless Nights“, the Mamas and the Papas’ “Dream a Little Dream“, ukulele classic “Tonight You Belong To Me“, and Pearl Jam’s own “Can’t Keep“.

The track listing of Vedder’s new album is: