Diving with the sharks – Azores 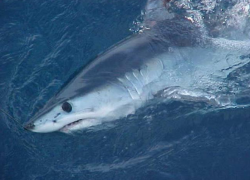 The Azores have become one of the most exciting places for divers looking for adventure and a close view at marine life.

Tour organizers have been luring adventurous divers to the islands with promises for chilling encounters with Blue and Mako sharks.

Based in Madalena do Pico, “Pico Sport”  is the ultimate “shark school,” and London based “Aquatours Ltd.” is advertising a Pico 7 day-6 night shark destination itinerary.

None guarantee shark sightings for everyone, but divers will not miss plenty of flying fish and close encounters with giant Sperm whales peacefully cruising the Pico-Faial channel.

In addition, species such as the northern Bottlenose Whales, Pilot Whales, Orcas and Sowerby’s Beaked Whales will sure to delight any sea adventure chasers.

Graciosa has become the next Azorean adventure destination. The island is now a watching post for whales and spotted and striped dolphin sightings.

The island is also featured as the perfect base for a deep sea diving tour with 20-30m under water visibility, abundance of fish, and fascinating pirate wrecks.

The Azores are located 1500km off the coast of mainland Portugal. The islands have a mild maritime climate controlled by the high pressure area, known as the “Azores High”, and the warm Gulf Stream.