Daniela Ruah: One of the sexiest women alive? – Esquire 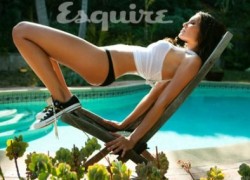 The editors of Esquire magazine have named Barbados native singer Rihanna the “2011 Sexiest Woman Alive” for their November edition, while Portuguese American Daniela Ruah was listed at the top of their list of  “Women We Love”  including international beauties distinguished for their artist talent, their beauty and their sexiness. Her name comes second next to Carla Gugino, and Hayley Atwell among others.

The Esquire distinction of “Sexiest Woman Alive” has previously been awarded to stars like Minka Kelly and Halle Berry.

Daniela Ruah, 28, was photographed and interviewed for the September edition of Esquire magazine.

Born in Boston, in 1983, the only child of Portuguese-Jewish parents, Daniela returned to Portugal with her family when she was five years old. In Portugal, she began working on “telenovelas” (soap operas) 11 years later when she was only sixteen. Currently in the United States she is a star of NCIS: Los Angeles and will soon appear in the upcoming movie Red Tails.