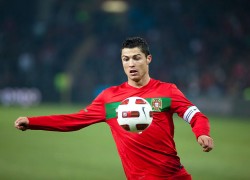 Portuguese soccer sensation Cristiano Ronaldo and is pregnant girlfriend Irina Shayk are said to be planning to wed some time soon in Madeira, his birthplace.

The couple has been together for over a year while Cristiano Ronaldo became the father of a baby boy born in secrecy from an undisclosed mother.

Ronaldo reportedly flew all the way from Spain to New York to propose to the Russian beauty on Valentine’s Day.

Shayk, who recently graced the cover of Sports Illustrated’s 2011 Swimsuit Issue, met Ronaldo last year while modeling together for Armani Exchange. Considered the best world’s soccer player, Cristiano Ronaldo is one of the world’s richest athletes.