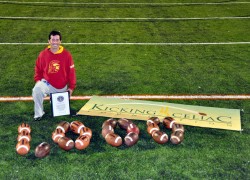 Started by Craig Pinto, 33, a former professional indoor football player for the New Jersey Revolution Arena football team, the Kicking4 Celiac Foundation is dedicated to raising money and awareness for Celiac’s Disease, a digestive condition that is triggered by the ingestion of gluten, which can damage the small intestines.

Pinto, was diagnosed with celiac disease 11 years ago. He was also diagnosed with Crohn’s Disease at age 12. After being diagnosed, Pinto decided he would help others who have the same disease. He established the Kicking4 Celiac Foundation to show children and adults alike that they can live a full life in spite of the disease.

Last year, Pinto raised $5,000 to benefit the Celiac Disease Center at Columbia University, the only center in the United States that provides comprehensive medical care, including nutrition, for adult and pediatric patients with Celiac Disease.

The foundation has also created a national Celiac Disease scholarship, which has drawn over 200 applicants in 2010. This year’s events will include a 5k run, the 2nd annual golf tournament, and the annual event for the Guinness World Records.

More recently, he set his second Guinness World Record within a year, by making the most field goals kicked in 24 hours, making an unbelievable 1,000 forty yard field goals in that time frame. Guinness recognized Pinto’s achievement and will documented it in the 2012 Book of World Records.

He coaches both youth football and ice hockey at local area schools. Craig is an avid New York Islanders hockey fan, a fan of the Portuguese National Soccer Team, as well as a New York Jets and USC Football fan.

Craig is a graduate of NYU and a former professional indoor football player for the New Jersey Revolution Arena football team, where he was also a team captain, from 2008-2010.

For donations and to learn more about Craig Pinto’s cause, visit www.kicking4celiac.com