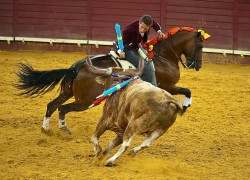 Portuguese animal defense activists are willing to compromise to preserve bullfighting by transforming the traditional bloody spectacle into an artistic performance.

Paulo Borges, the leader of PAN – National Party for Animals and Nature –  said in a recent interview for Lusa that his organization would support the preservation of bullfighting if the animal abuse and the bloodshed were banished and only the “positive” aspects of the sport were preserved.

The National Party for Animals and Nature (PAN) is one of the many fringe enlisted Portuguese political parties participating in the June 5 elections.

PAN will not support bullfights that torture the bulls and horses and places human life in danger.  He said, “Our concern is not only for the well-being of the animal, but also with human well-being because a bullfight is a violent spectacle that does not contribute to public morality or a culture of peace.”

The party is also promoting the introduction of vegetarian menus in schools and hospitals, the inclusion of alternative medicines in the National Health Service (SNS) and advocates for children starting school at the age of seven.

The origins of bullfights, estimated to be thousands of years old, are lost to history.  Bullfighting in Portugal traces its roots to ancient times, when Celts fought bulls in pagan festivals.

In modern Portugal, the interest for bullfights is in decline. Although the practice is still active in some southern and central regions of mainland Portugal and Terceira island, in the Azores, in most of Portugal bullfighting has little or no presence.