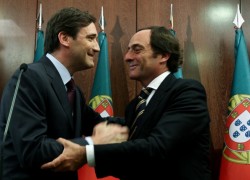 Portugal’s newly elected center-right coalition unveiled its government program. The document was presented to Parliament on Wednesday to be debated on Thursday and Friday.

The program is based on the agreement with the so-called “European troika” — European Union, European Central Bank, International Monetary Fund.

State-owned Caixa Geral de Depósitos (CGD) will be partially privatized. The revenue from the sale of parts of CGD is to be used to increase the bank’s capital ratios and its ability to lend to companies.

State-owned broadcaster and a public TV channel, Rádio Televisão Portuguesa, will be sold, as will the government’s majority stake in the national news agency LUSA.

The government will suspend the construction of a high-speed rail line linking Madrid to Lisbon. Public transport providers, such as the Lisbon and Porto bus companies and subway systems, will also be assessed to be sold off.

Public hospitals and other public health services may be turned over to private management for higher efficiency, without compromising the essentially free health care services.

The government austerity program also includes measures to make the labor market more flexible. Changes include reducing corporate contributions to the social-security system and reducing costs for dismissing workers, among other measures. Pay-offs for staff to leave the civil service will be negotiated and a highly restrictive hiring policy in public services will be enforced.

The government is also to cut the time needed to qualify for unemployment benefits from 15 to 12 months, still short of the promise to reduce the benefit period from the current 30 months to just 18, as requested by the European bailout agreement terms.

Changes to public and religious holidays will be also implemented by ending the long weekends, when people take the Friday off following a holiday that falls on a Thursday.

Unemployment stands currently at a record 12.4 percent. Trade unions have already vowed to fight any attempt to strip away long-standing entitlements such as job protection.

Portugal is stuck in a double-dip recession that is predicted to last through next year. Banks are reluctant to grant credit and are charging interest rates of up to 12 percent on loans. Cash-flow problems are making it hard for economically viable companies to buy raw materials.