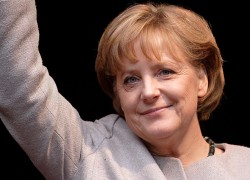 German Chancellor Angela Merkel told supporters at a political rally in Germany Tuesday that “It’s not just about getting any further into debt in countries such as Greece, Spain and Portugal, people should not be allowed to receive pensions before their German counterparts.”

She also said, “We all have to put in some effort. This is important, we cannot have the same currency, yet some have an abundance of holiday leave and others have very little”, implying that southern Europeans are less industrious that their northern European counterparts.

Reflecting what some have described as “the principle of xenophobia” the German Chancellor also remarked, “We cannot stand by these countries and allow them to act the way they have up until now. Germany will help, but only if these countries demonstrate they are putting in the necessary effort”, added the Chancellor.

Merkel’s comments shocked many Europeans and stirred a wave of protests in the countries targeted by her populist remarks implying that southern Europeans are not working hard enough, while Germans are bailing them out.

In fact, effective retirement age for German workers is at 61.8 years old, much earlier than for the Portuguese who retire at 65, the Spanish at 67, and Greeks at 65.  Portugal will be gradually raising the retiring age to 67 between 2012 and 2029.

Regarding the amount of vacation time, the Portuguese workers get an average of 22 vacation paid days, the Spaniards 21, and the Greeks 20 days — while the Germans enjoy between to 20 to 30 days, compared to France 38, Italy 31, and Great Britain 26 days.

In other industrialized countries the average for Canada is 15 paid vacation days, United States 13 days, Russia 28, Japan 20, and Brazil 30 days.

Portuguese trade unionist, Manuel Carvalho da Silva, said of Markel’s remarks, “This is the purest colonialism,” and he added, “the rich continue to live at the expense of the poorest countries in a disastrous system of exploitation.”