Birth rate one of the lowest in the world – Portugal 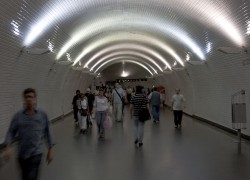 A study released by  the Organization for Economic Co-operation and Development (OECD), revealed that,  from 1960 to 2009,  the average number of children born in Portugal has decreased from 3.1 to 1.32 per woman.

According to the report based on information from 2009,  out of 31 countries participating in the study, Portugal had the second lowest birth rate in the study, before Korea, where the average fertility rate is 1.15 children per woman.

Portugal also had the eighth highest rate of child poverty of the participating countries, with a poverty rate of 16.6 percent, 4.1 points above the OECD’s overall average of 12.7 percent, said the OECD report.

Ahead of Portugal, with higher child poverty rates are Israel, Mexico, Turkey, the United States, Poland, Chile and Spain — while Denmark, Norway and Finland have the lowest rates of impoverished children having rates of 3.7, 4.2 and 5.5 percent, respectively.

According to OECD report, in France where the government has invested heavily in family support, the rate of birth has climbed to an average of 2.00 children per woman.

The study also revealed that between 2003 and 2009, the fertility rate of the 27 nations of the European Union increased from 1.47 children per woman to 1.60,  a figure that remains well below the replacement level of 2.1.

The report also suggests that investment in child-friendly policies plays a role in encouraging women into having more children. France, with an average of 2.00 children per woman, spends 3.8 per cent of  its GDP on family-friendly policies compared to 2.4 per cent by other OECD members.