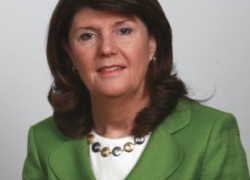 Berta Cabral, the Mayor of Ponta Delgada, São Miguel, Azores, will be visiting the United States from November 11 thought November 15.

On November 12, Berta Cabral will be honored at the Portuguese American Leadership Council (PALCUS), for International Leadership, at the 15th PALCUS Annual Gala and 20th anniversary celebration in Washington, DC..

Berta Cabral, who is the leader of the Social Democratic Party (PSD) in the Azores and a candidate to the presidency of the Government of the Azores for the 2012 election, is also visiting the Portuguese community of Azorean descent in New Jersey and Massachusetts.

On November 10, Berta Cabral will meet with Azorean community representatives at 4m, at the Clube Açores, in Newark, NJ.

On Sunday November 13, Berta Cabral will be at 5pm at the Faialense Sports Club, Cambridge Street, in Cambridge, to meet with representatives from the Portuguese-American community.

On Monday, November 14 she will be visiting the Portuguese Consulate General in Boston, to meet with Consul General Paulo Cunha Alves and, at 6pm, she will be a guest at a reception in her honor to be held at Clube Portugues de Hudson, Hudson, MA.