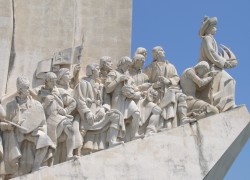 Barry Hatton, a Lisbon-based foreign correspondent, has lived in Portugal for over two decades. His book “The Portuguese: A Modern History,” published May, 2011, is a blend of historical analysis with personal anecdotes.

The author describes Portugal, a country with a long history, from being the oldest country in Europe with fixed borders and once becoming one of the most powerful nations in the world, to establishing itself as a modern nation, a founding member of NATO and a member of the European Union.

The book explores the historical process by which the Portuguese shaped their history, from the founding of the nation in the 13th century, to the Renaissance and the Age of Discovery in the 15th and 16th centuries, to the formation of its global empire and the country’s decline in the 18th and 19th centuries, to focus on the dark legacy of Salazar’s dictatorship in the 20th century and the vibrant revival after the April 1974 Carnation Revolution.

From the participant observer perspective, Barry Hatton blends in the historical narrative his personal experience and his love for his adoptive country, making “The Portuguese: A Modern History” a truly post-modern unique book. He writes of culture shock and acculturation from the insider/outsider expatriate point of view that finds himself immersed in a way of life that is both transformative and alien.

In so many ways, “The Portuguese: A Modern History” is a personal perspective from someone who deeply understands the history, the people and the culture of a country full of contrasts and contradictions that has so much to offer. This informational and enternaining account of Portugal, old and new, is a required traveler’s companion book.

Barry Hatton, born in Doncaster, UK, in 1963, is married to a Portuguese wife and has three Portuguese born children. He has previously co-authored a biography, in Portuguese, of Portugal’s first woman prime minister, Maria de Lourdes Pintasilgo. He has been a correspondent for the Associated Press in Portugal since 1997.